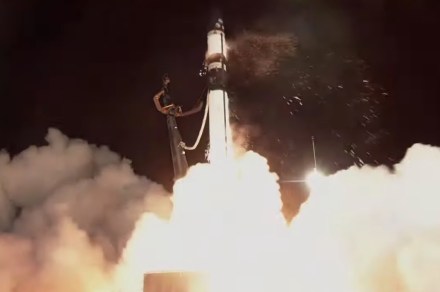 You can watch Rocket Lab’s workhorse Electron rocket launch the satellite to space in the video below:

Short for Cislunar Autonomous Positioning System Technology Operations and Navigation Experiment, the CAPSTONE satellite will perform an important role for NASA as it will become the first to test the proposed lunar orbit for the Gateway, a multipurpose space station that will offer vital support for long-term astronaut missions to the moon as part of the space agency’s Artemis program.

Built by Colorado-based Advanced Space, CAPSTONE is currently in a stable orbit attached to Rocket Lab’s Photon Lunar spacecraft bus, an interplanetary spacecraft that will soon set the 55-pound (25 kilogram) satellite on a course toward the moon.

“From the initial parking orbit that CAPSTONE is in now, Photon Lunar’s HyperCurie engine will perform a series of orbit-raising maneuvers over five days,” Rocket Lab said in a release. “The HyperCurie engine will ignite periodically to increase Photon’s velocity, stretching its orbit into a prominent ellipse around Earth.”

In the middle of next week, HyperCurie will ignite for the final time, pushing the Photon Lunar to a speed of 24,500 mph (39,500 kph) to set it on what’s known as a “ballistic lunar transfer.”

Minutes later, Photon will release CAPSTONE for its first solo spaceflight, which will enable it to reach its lunar orbit in about four months’ time.

CAPSTONE will then spend around six months collecting data to help NASA engineers determine if the orbit will be suitable for its Gateway station. Additional tests will also be carried out, such as communication systems with Earth and a spacecraft-to-spacecraft navigation system.

Rocket Lab is competing with the likes of SpaceX and Virgin Orbit in the smallsat launch market. While it usually launches satellites into low-Earth orbit, this latest mission is a more ambitious effort as it represents the company’s first lunar endeavor.

“Today’s launch was an important step in humanity’s return to the moon and a testament to the determination, resolve, and innovation of the hundreds of people behind CAPSTONE,” Peter Beck, Rocket Lab founder and CEO, said in a release. “Rocket Lab was founded to open access to space and enable ground-breaking missions like this that push the limits of what’s possible with small satellites. While CAPSTONE’s journey to the moon has only just begun, we’re proud to have safely delivered CAPSTONE to space.”

Bradley Cheetham, principal investigator for CAPSTONE and CEO of Advanced Space, commented: “Delivering the spacecraft for launch was an accomplishment for the entire mission team, including NASA and our industry partners. We have already learned a tremendous amount getting to this point, and we are passionate about the importance of returning humans to the moon, this time to stay.”

NASA’s next crewed mission to the lunar surface will take place no earlier than 2025.