Twitter has launched a new program that will enable student athletes to generate income from replays of their highlights within tweets, with ads inserted into their posted clips then pushing direct revenue to the athletes, as part of a new agreement with PAC-12 Football. 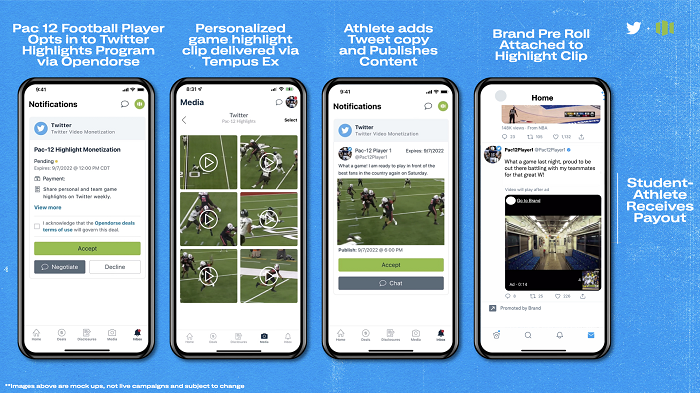 “For the first time ever, Twitter and Opendorse will now provide a pathway for student-athletes to earn NIL compensation by sharing personalized game highlights, enabled by Tempus Ex, to Twitter via their own handle. Throughout the 2022-23 college football season, PAC-12 Football players will publish personalized highlight clips following games. Once published, pre-roll advertising secured through Twitter Amplify will run on the video and the student-athlete will be compensated, marking the first time student-athletes can monetize their own game highlights in this way.”

The process is one of the first social media-specific initiatives to capitalize on the NCAA’s new rules which allow college athletes to generate income from their likeness, and is expected to bring in millions of dollars for these young stars every year.

The deal is also facilitated for PAC-12 athletes specifically due to PAC-12 Networks owning the licensing rights to the conference’s game footage, even if it airs on another network like Fox or ESPN first.

That enables this new type of direct monetization for student athletes, which will also provide a range of new ad placement options for brands, which can now reach college sports fans in an entirely new way.

It’s an interesting initiative – and it’ll be equally interesting to see just how much revenue the players are able to earn from this type of supplementary process, and what kinds of results they might drive for brands.

I mean, PAC-12 Football has millions of fans, and huge reach, and it wouldn’t be surprising to see these highlights generate significant response via tweet, with each play bringing in a few extra cents for the players.

Though it could also incentivize more highlight plays. Which is maybe not a bad thing, but post touchdown dances could take on a life of their own, with players even crowd-sourcing their next performance to maximize viral traffic.

It seems like a lesser consideration in this respect, but it will be interesting to see how it plays out in practice.