The best moments in the Star Wars franchise, ranked – IGWIIKI 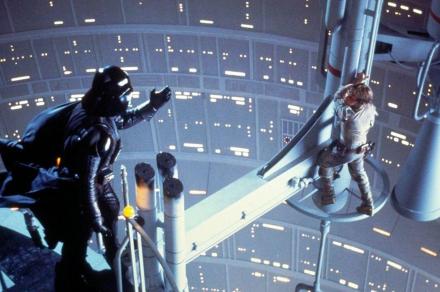 These lists are great fun, but what we most care about in our Star Wars movies is story and emotion. We all cherish the times we thrilled, chilled, and gasped through the saga’s epic sacrifices, tragic losses, and shocking revelations. To honor these moments, we present a definitive ranking of the biggest, boldest, and most operatic moments from the Star Wars feature films.

As Luke (Mark Hamill), Han (Harrison Ford), and Leia (Carrie Fisher) attempt to escape the Death Star, encountering obstacles at ever turn, Obi-Wan (Ben) Kenobi (Alec Guinness) confronts his old nemesis, Darth Vader (David Prowse) and proceeds to engage in what remains the least stirring lightsaber fight ever committed to screen, so much so that George Lucas and other Star Wars creators have been trying to one up/remake it ever since.  This includes the recent Disney+ offering Obi Wan Kenobi, which more or less exists as an excuse to restage the duel as elaborately as possible (though a fan had already brilliantly reimagined it).

Lucas, perhaps recognizing that the fight was a bit underwhelming, compensated by following it with a cathartic response. Luke, watching in heartbroken disbelief as Vader strikes down his beloved mentor, launches into a frenzied stormtrooper massacre. The reaction, more than the death itself, provides the emotion in the scene, along with, as always, John Williams’ legendary music.

9. Rey battles Kylo in a snowy forest (The Force Awakens)

The Force Awakens is not a great movie, but J.J. Abrams, with his talent for faithful recreation (not to say mimicry), does provide a handful of stirring moments and this is one of them. Finn (John Boyega) and Kylo Ren are engaged in snowy forest combat when Finn goes down and Kylo attempts to Force retrieve his fallen lightsaber. The saber rattles suspenseful, then flies up and past Kylo into the sure grip of Rey (Daisy Ridley), who proceeds to whale on Ren like he’s the schoolyard bully who took her brother’s lunch money.

This is tremendously satisfying, not least because of its importance as a girl power moment, and I don’t say this with derision. One of the reasons why the movie was so huge was because a young woman finally took on the Jedi hero mantle and this is the scene when the force fully, well, awakens in Rey. Did you also know she was the last Skywalker? For a man who prides himself on his mystery box storytelling, Abrams’ titles can be thuddingly literal.

Whether you like the film or not, you can’t deny the power of Luke’s death scene. After sacrificing himself to save his friends one final time (without shedding blood, I might add), he gazes out at the setting sun from the island of Ahch-To, his adopted home for so many years, and imagines the twin suns of Tatooine before poofing out of the mortal realm to join his fellow deceased Jedi.

As I wrote previously: “The final vista of the twin suns, bold and glorious, reveal that his nostalgia for them never faded, despite all of Yoda’s entreaties to live in the moment. At heart, Luke was still a young man and a dreamer. Perhaps, then, his greatest sacrifice was to lay low for the greater good when he still wanted to be out among the stars, skywalking.”

Lucas is a master of weaving parallel action, especially in his multi-strand climaxes, and this montage is one of his most emotionally affecting. As the Jedis and Clones are fighting the Separatists across far-flung worlds, Emperor Palpatine orders the execution of the secret Order 66. In effect, this is the moment that the Clone troopers become stormtroopers that now serve the Empire. In an instant, their programming switches over and they assassinate the Jedi they’ve been fighting alongside. The Jedi are so completely caught by surprise, they crumple under Clone fire almost without resistance.

The montage is brief, but it’s among the most lyrical filmmaking in Lucas’ oeuvre. John Williams wrote some great choral music for the prequels — think “Duel of the Fates” — and the mournful choir he weaves throughout this requiem is among the most moving. The sequence ends with Yoda literally clutching his broken heart.

6. The destruction of Scarif (Rogue One)

Watching the film for the first time, I remember being pleasantly surprised (and also, of course, grief-stricken!) as our heroes began to fall one by one under the relentless barrage of Imperial troops. Like any Star Wars aficionado, I was stunned out of my shorts that the Stormtroopers actually hit something. But beyond that, the idea that primary characters in a major serialized franchise would bite the dust without any chance of coming back as Force ghosts or whatever was really something rare and unexpected.

Even so, I thought our protagonists would be rescued as the Death Star blast hurtles toward them like the most terrifying nightmare blend of nuclear apocalypse and tsunami (tsupocalypse?). Instead, the bold ending gave new depth to Star Wars, viscerally underscoring the reality that fighting totalitarianism has real costs. And of course, Disney never had any worries. Even without Force ghost resurrections, characters can always return in a prequel.

5. Luke defies the Emperor (Return of the Jedi)

After first seeing ROTJ at age 10, I knew this was my favorite movie scene ever, though I couldn’t articulate why. Years later, I recognized that it’s the moment in every good story when the protagonist makes a climactic choice under pressure that defines his values — the culmination of the moral struggle that is the raison d’être of storytelling itself.

“Your hate has made you powerful,” the Emperor tells Luke as he is on the verge of vanquishing Vader with his new lightsaber. “Now fulfill your destiny and take your father’s place by my side.” Luke, realizing with horror what he is about to do, throws away his lightsaber. “Never. I’ll never turn to the Dark Side,” he proclaims. “You’ve failed, your highness. I am a Jedi, like my father before me.” It’s a simple but powerful expression of the willingness to die for your beliefs. Thankfully, Luke doesn’t end up paying the ultimate price, though the Emperor does fry him like a bucket of KFC for a while.

Lucas had been imagining this confrontation between Obi-Wan (Ewan McGregor) and Anakin Skywalker (Hayden Christensen) even before he made A New Hope back in the ’70s. I remember reading about it in a movie magazine as a kid in the ’80s and being very excited. Of course, I didn’t know at the time that we would all have to suffer through The Phantom Menace to get there. But suffering is just part of the Hero’s Journey, I guess.

Yet the tepid response to the first two prequels, even among fans (I have since made a revisionist case for Attack of the Clones), is part of the reason why the climactic showdown between Obi-Wan and Anakin on the lava planet Mustafar is so affecting: the intensity of the emotion floors us after all the flat acting and inert digital backgrounds. When Obi-Wan, his voice raw and ragged, cries out, “You were my brother, Anakin!” as his erstwhile Padawan writhes in limbless agony, the tragic regret he feels cuts deep.

3. Han Solo goes into carbon freeze (The Empire Strikes Back)

This harrowing sequence is a big reason why The Empire Strikes Back is so sweeping and epic. Darth Vader captures Han and Leia as a way to lure Luke to Cloud City. His plan is to put Luke into carbon freeze (which is not a thing, but definitely sounds cool) for his “journey to the emperor,” but they need to test it first to make sure it doesn’t kill the subject. Enter Han, literally. As Captain Scoundrel descends into the lower depths, Han and Leia, facing what might be their last moment together, share their immortal exchange. “I love you,” she says. “I know,” he responds, in a line Harrison Ford famously improvised.

The baroque scene is famously beautiful, shot in deep blues and oranges with mist and smoke flooding the chamber. But the amazing soundtrack is equally if not more responsible for the effects: Chewbacca’s stricken howls, the bizarre alien noises of the carbon-freezing process, the nerve-shattering boom of Han’s frozen husk toppling to the floor, and of course, John Williams’ lush orchestral score. It all adds up to one one of the most potent scenes in movie history.

2. Luke discovers his murdered aunt and uncle (A New Hope)

It’s still the most shocking and unexpected image in all of Star Wars: Luke rushing back to the family homestead on Tatooine to discover that Imperial Stormtroopers have burned it down and killed Uncle Owen and Aunt Beru. Lucas designed the scene as a homage to John Ford’s The Searchers in which Ethan (John Wayne) and Martin (Jeffrey Hunter) similarly discover their family slaughtered by Comanche.

The scene would be powerful enough without including the scorched skeletal corpses with gaping ribcages that became the inspiration for these delightful fan-made action figures. Their gruesomeness — which Lucas emphasizes in medium close-up — still feels out of place within this PG-rated universe. But viewers understood immediately what the Empire was capable of (something which Andor has also brilliantly dramatized throughout its first season), and nobody that saw it ever forgot it.

1. Luke learns of his true parentage (The Empire Strikes Back)

I Am Your Father Scene [4k UltraHD] – Star Wars: The Empire Strikes Back Fight Scene (2/2)

Reviewing the 1997 Special Edition of the movie, Roger Ebert wrote, “It is because of the emotions stirred in Empire that the entire series takes on a mythic quality that resonates back to the first and ahead to the third. This is the heart.” If Empire is the heart, then this is the heart of the heart that gives Star Wars its dark, operatic power. The sequence builds expertly, with the more experienced and powerful Vader forcing Luke into a series of retreats until he is on a gantry suspended over the metallic abyss of Cloud City’s reactor shaft. Once he corners Luke, Vader stops toying with him and slices off his hand, sending the severed appendage spiraling into the chasm. Luke, battered and bruised, facing what appears to be his imminent doom, then must endure the most shocking parental revelation since Polanski’s Chinatown. Talk about adding insult to injury.

I always point to Luke’s reaction whenever anyway claims that Mark Hamill isn’t much of an actor. The emotion he generates here is incredibly raw. Terrified, traumatized, and freezing (it’s really windy in there for some reason), the young apprentice takes the only way out that he can (the implications of which are pretty serious when you think about it. Thankfully, there’s a soft landing at the bottom of this endless void). Even for those who have known the big reveal for decades, the scene retains its full, um, Force. After 45 years, it remains the most powerful Star Wars moment.

You can watch all the Star Wars movies and TV shows on Disney+.