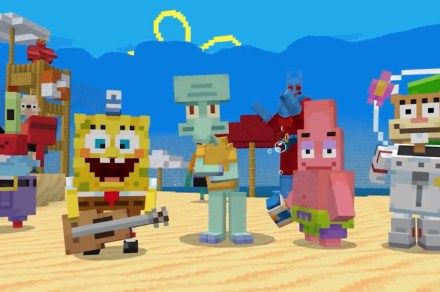 Who lives in a pixelated pineapple under the sea? SpongeBob SquarePants! The nautical star of Nickelodeon’s longest-running animated series and his friends have come to Minecraft in a new DLC pack.

Mojang released the SpongeBob SquarePants DLC on Tuesday, made possible by a collaboration with Nickelodeon and Spark Universe. The new DLC gives fans of both Minecraft and SpongeBob access to various Bikini Bottom locales for them to explore and the skins of over 40 SpongeBob characters created by Spark Universe.

The SpongeBob SquarePants DLC was created as an immersive experience for fans who always wondered what it would be like to eat at the Krusty Krab, take boating lessons at Mrs. Puff’s Boating School, practice science and karate with Sandy, run around Jellyfish Fields, and even surf some waves at the Goo Lagoon. You can either play as your avatar donning an aquanaut — air helmet and all — or as any of your SpongeBob characters, ranging from Sandy to Bubble Buddy to Mermaid Man.

As you traverse through Bikini Bottom, you’ll pick up collectibles and items that are integral to your mission to make everyone’s day the best day ever. You’ll be tasked with crafting an instrument for Squidward to help fulfill his dream of performing on the Oyster Stage, fending off a school of hungry anchovies from the Krusty Krab by slinging Krabby Patties into their bellies, helping Patrick with his DIY building projects, and stopping Plankton from taking over the city (and possibly stealing the Krabby Patty formula).

You’ll also be able to recreate some of the best scenes from the series, some of which have already turned into memes. You can build a statue of SpongeGar with his confused look, or a meme of an overwhelmed Mr. Krabs surrounded by angry Pretty Patties customers.

You can download the SpongeBob SquarePants DLC from the Minecraft marketplace onto a platform of your choice. Whether you play on PS5 or Nintendo Switch, you can have the best day ever.