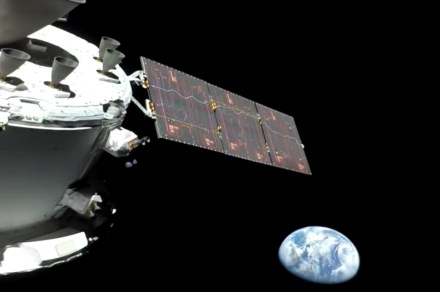 NASA’s uncrewed Orion spacecraft has sent back its first images Earth as it heads toward a rendezvous with the moon as part of the historic Artemis I mission.

A video stream from a camera attached to the spacecraft captured Earth gradually coming into view several hours after launch:

It’s the first time for a human-rated spacecraft to capture distant images of Earth since the final Apollo mission in 1972. “The views of our blue marble in the blackness of space are now capturing the imagination of a new generation, the Artemis generation,” a NASA commentator said.

The Orion launched atop the Space Launch System (SLS) rocket from the Kennedy Space Center in Florida early on Wednesday, November 16.

With 8.8 million pounds of thrust at launch, the SLS rocket is the most powerful ever to have blasted to space. The mission, which will last 25 days and end with Orion splashing down off the coast of California, will test key technologies for upcoming crewed Artemis missions as NASA seeks to establish a permanent moon base on the lunar surface.

“Each CubeSat has its own mission that has the potential to fill gaps in our knowledge of the solar system or demonstrate technologies that may benefit the design of future missions to explore the moon and beyond,” NASA said.

Following a series of burns to keep it on course, the Orion is expected to fly by the moon on Monday, November 21, performing a close approach of the lunar surface as it heads toward a distant retrograde orbit, a highly stable orbit thousands of miles beyond our celestial neighbor.

“It’s taken a lot to get here, but Orion is now on its way to the moon,” Jim Free, NASA deputy associate administrator for the Exploration Systems Development Mission Directorate, said on Wednesday. “This successful launch means NASA and our partners are on a path to explore farther in space than ever before for the benefit of humanity.”

You can track the Orion spacecraft’s progress throughout its mission on a special NASA website.