Meta has begun informing Facebook users that it’s removing several profile info fields, in order to streamline the platform and make it ‘easier to navigate’.

Though not sure that it’ll have a huge impact. 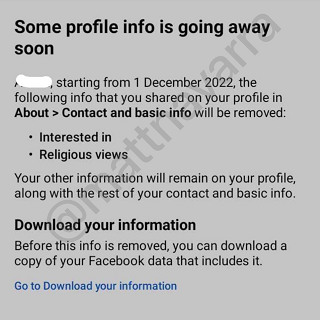 As you can see in this notification, which was shared by social media expert Matt Navarra, Meta is sending out notifications to users who’ve filled in the following fields to let them know that they’ll soon be removed:

Meta has confirmed the removal of these profile elements, explaining that:

“As part of our efforts to make Facebook easier to navigate and use, we’re removing a handful of profile fields: Interested In, Religious Views, Political Views, and Address. We’re sending notifications to people who have these fields filled out, letting them know these fields will be removed. This change doesn’t affect anyone’s ability to share this information about themselves elsewhere on Facebook.”

So if you’ve entered this info in, it’ll soon be erased, and no longer displayed to visitors to your Facebook presence.

But that’ll impact ad targeting, right? If people can’t list their religious affiliation, then you won’t be able to use that as an ad element.

Well actually, Meta removed all of these aspects as ad targeting options already, as part of a revision of its data options earlier this year.

As Meta explained at the time:

“Starting January 19, 2022 we will remove Detailed Targeting options that relate to topics people may perceive as sensitive, such as options referencing causes, organizations, or public figures that relate to health, race or ethnicity, political affiliation, religion, or sexual orientation.”

Meta implemented that change in order to better align with Europe’s GDPR, which prohibits the targeting of users based on such, unless they’ve each individually provided explicit consent. That law came into effect in 2018, and Meta had been railing against it, but with the broader, global shift towards more privacy, and more data control for users, Meta eventually conceded the point, and moved in alignment with the more stringent privacy regulations.

So if Meta can’t use these as ad targeting options anyway, I guess there’s not much point having them at all, while it already knows where you are based on the data you share from your device.

In essence, Meta no longer has any need for you to share this info on your profile, and each of these elements could also lead to discrimination and harm simply by being present. So it’s probably better to remove them – but the overall impact on how the platform operates will be largely unchanged.

‘But hang on,’ I hear you say, ‘with Apple’s iOS privacy update, Meta can’t track my location anymore, right? So it does need my address.’

Nah. Apple’s ATT update enables users to stop apps, like Facebook, from tracking their activity across other apps and websites – so if you switch it off, Facebook’s can’t, for example, track what you do in other apps, or your web browsing behavior, in order to complement what it already knows about you from its own apps. But it can track your activity within its platforms, which, unless you’ve switched it off, includes your location.

Again, the impact is pretty much null, while the potential negatives of having this info listed on your page could cause unnecessary harm. So best just to remove it.

Now you know why you’re getting this notification in the app.

Meta says that all of these fields will be deactivated by December 1st.