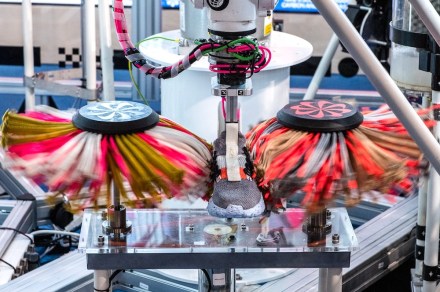 Keen to burnish its green credentials by making sneakers last as long as possible, Nike has come up with the Bot Initiated Longevity Lab, otherwise known as BILL.

BILL (below) is an enormous brush-laden contraption that’s designed to clean your Nike footwear to make them look as good as new.

This month BILL is living in Nike’s flagship store in central London, offering customers the chance to have their Nike sneakers spruced up for free. The service even includes any minor repairs that need doing, though it seems that human staff, rather than BILL, will perform those.

So, how does BILL work its magic? Well, according to Nike, after loading a shoe into the robot, BILL first creates a 3D digital model of it to highlight targeted cleaning areas on the shoe’s upper, sidewalls, and outsole.

Shoppers can also manually select areas of wear-and-tear on the shoe’s upper to indicate what they’d like to have repaired.

Once BILL has deployed its various brushes, cloths, and other tools to attend to the shoe’s needs — a process that apparently takes around 45 minutes — Nike staff will take a moment to add new liners and laces made from recycled materials. And, with those repairs presumably taken care of too, you should be good to go.

“The thing is, maintaining old product is deeply personal,” Nike executive Noah Murphy-Reinhertz said in a release. “People will go to great lengths to care for their favorite shoes. Repairing a product is a way to extend our memory with a product. We see BILL as a tool for being able to do that. Robots can do things that are tough to do by hand, but when we used robotics as part of a recycling technology, we still want the service to be personal.”

Murphy-Reinhertz said BILL’s deployment is a trial exercise that will hopefully provide Nike with some useful insights for its future involvement in sustainable services.

BILL complements the company’s existing green service such as Nike Refurbished, which extends the life of eligible products by refurbishing gently worn, slightly imperfect sneakers, and Nike Recycling and Donation, which asks customers to hand in their old Nike sports gear so that parts of it can be reused in some way.

You can meet BILL at Nike Town on London’s Oxford Street throughout September. After that, guess you’ll have to chuck your sneakers in the washer as usual.