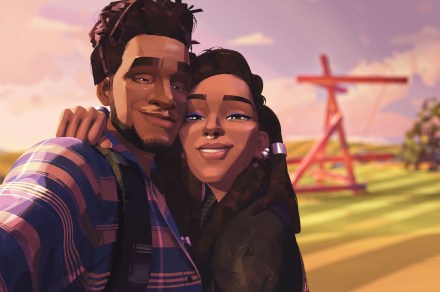 Kid Cudi is showcasing the challenges of young love in New York City in his new television special, Entergalactic. Netflix released the first trailer for Cudi’s animated series, which releases in conjunction with the artist’s new studio album of the same name.

Cudi voices Jabari, a young artist attempting to balance his career with his love life, which includes overcoming his previous relationship with ex-girlfriend, Carmen (Laura Harrier). When Jabari meets Meadow (Jessica Williams), his world turns upside down as the two engage in a budding relationship. As his feelings grow for Meadow, Jabari hesitates to make things serious, further complicating the relationship. However, Jabari soon learns that love may be the only thing that “saves us all.”

The series boasts an impressive cast that includes Timothée Chalamet, Vanessa Hudgens, Macaulay Culkin, Christopher Abbott, Teyana Taylor, Jaden Smith, Arturo Castro, 070 Shake, Ty Dolla $ign, and Keith David. Cudi serves as an executive producer alongside Kenya Barris, who is best known for the Emmy-winning Black-ish. Directed by Fletcher Moules on a script from Ian Edelman and Maurice Williams, Entergalactic serves as the visual component for the album as Cudi’s music will make up the soundtrack to the series.

Cudi continues to build upon his successful acting career after breaking out on HBO’s How to Make It in America. Earlier this year, the rapper appeared in the slasher X, and will soon appear in Disney+’s Crater as well as make his feature directorial debut with Netflix’s Teddy.