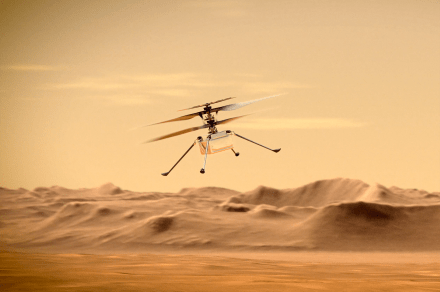 Despite the brief nature of the flight, the success of the short hover just 16 feet off the ground successfully tested two new and important capabilities for the helicopter: hazard avoidance when landing, and the use of digital elevation maps to aid navigation.

“Ingenuity was developed as a technology demonstration and designed to operate on Mars in flat, smooth terrain,” Joshua Anderson of NASA’s Jet Propulsion Laboratory (JPL), which is overseeing the mission, explained in a post about the aircraft’s most recent flight.

The JPL team member said that as Ingenuity continued its explorations of Jezero Crater alongside NASA’s Perseverance rover, both vehicles encountered increasingly challenging terrain beyond what the team had been expecting.

The new hazard-avoidance software enables the helicopter to use its downward-facing navigation camera to identify the safest visible landing site, allowing it to safely land among rockier terrain than before, which means more potential landing sites for the diminutive drone-like machine.

“In prior flights, Ingenuity’s pilots have needed to find airfields free of any rocks or other obstacles that could potentially damage the vehicle when landing,” Anderson said. “Jezero Crater is a rocky place, so safe airfields have been tough to find.”

The digital elevation maps will also help to eliminate a problem in which hilly terrain causes veering issues for the helicopter as its navigation software had only been designed to handle flat terrain.

The team will now use the results from Ingenuity’s short and simple flight to begin more advanced testing of the new capabilities to confirm they’re working as designed.

Anderson said the update makes the aircraft “a far more capable vehicle and effective scout for Perseverance,” adding: “We’re all excited to see where this update will allow us to take Ingenuity’s journey next.”

Ingenuity’s shortest flight took place on November 23 and was the aircraft’s 34th to date. Its longest flight up to now lasted 169.5 seconds during a mission in August 2021.

The helicopter has been helping to find safe routes for the ground-based Perseverance rover, which is spending its time searching for evidence of ancient life on the distant planet, as well as testing new technologies for future human missions to Mars.