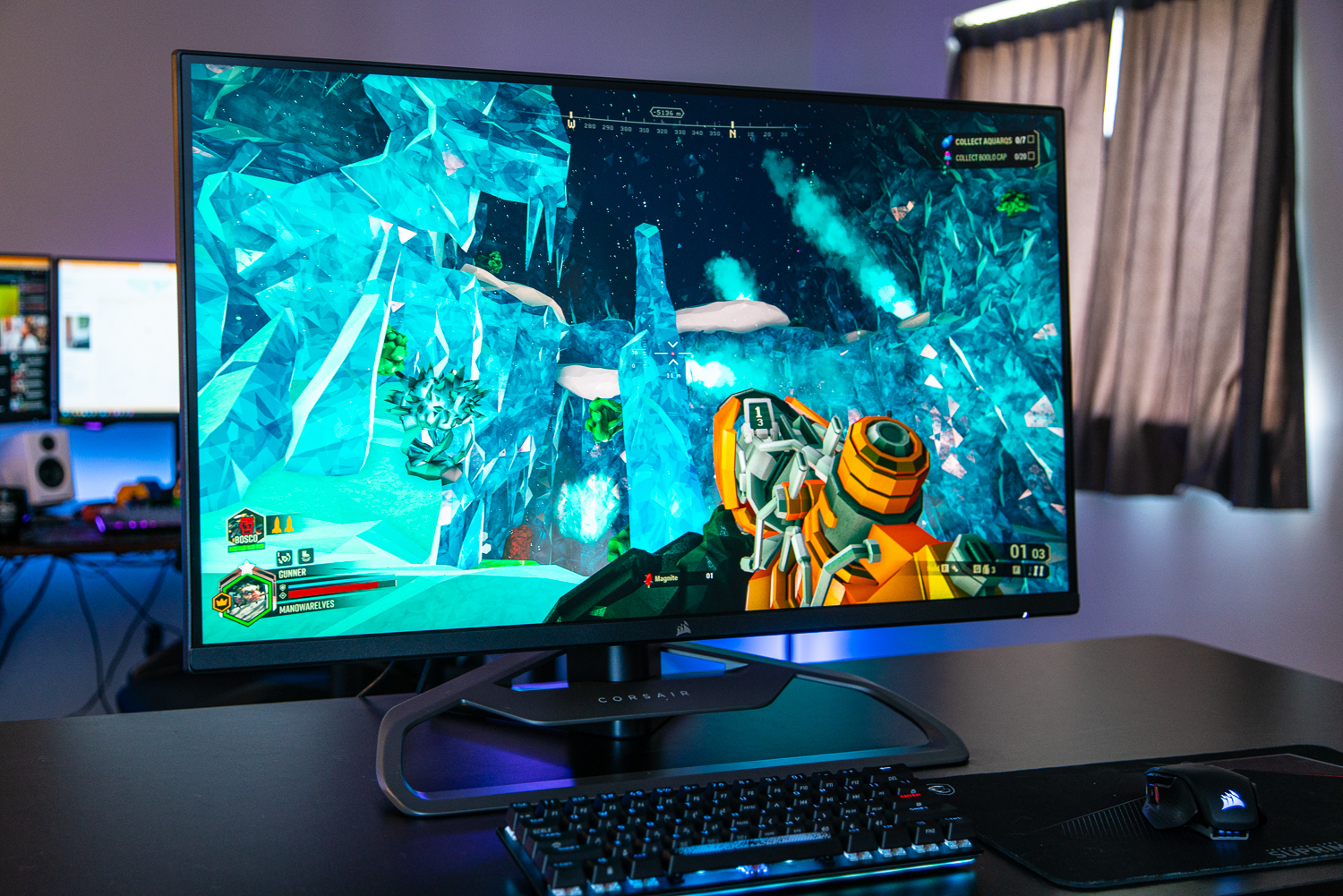 “Corsair’s first 4K gaming monitor is great, but there are cheaper options that go toe-to-toe on specs.”

Corsair isn’t known for making gaming monitors, but it’s starting to make inroads into the space. The Xeneon 32UHD144 is the company’s first 4K gaming monitor, and although it’s not quite up to snuff with the best gaming monitors you can buy, it’s still a solid step forward into a new market.

It’s not just a retread of other 4K monitors you’ve seen, as it implements a quantum dot layer to improve color, which works wonders. Integration with Corsair’s excellent iCue software is a big selling point as well. Where the Xeneon 32 loses out is on HDR and pricing, especially as competing displays like the Sony InZone M9 become more common.

The Xeneon 32 is a monster monitor, for better and worse. It includes a large metal stand with plenty of cable routing potential, as well as several cable routing channels on the back of the chunky arm. The top of the stand even includes a mount for the Elgato Flex Arm, allowing you to attach a light or webcam directly to the monitor.

I love the goodies, but the Xeneon 32 is just big. A 32-inch screen is already massive, and Corsair went with a stand that eats up desk space. It doesn’t stretch out in front of the monitor like the stand on Acer Predator X28, but it’s still massive. It’s heavy, too. With the monitor and stand, the Xeneon 32 is just a hair short of 21 pounds. That’s six pounds heavier than the 34-inch ultrawide Alienware 34 QD-OLED.

Big and heavy isn’t inherently bad, but you should know what you’re getting into with the Xeneon 32. The good news is that the stand is a significant contributor to the weight and size, and you can replace it with a monitor arm thanks to the display’s 100mm x 100mm VESA mount.

For ports, the Xeneon 32 has the basics down pat. The two HDMI 2.1 ports take point, wenabling 4K at 144Hz, unlike older HDMI 2.0 ports. Most PC gamers will use the DisplayPort 1.4 port instead, but it’s nice to see HDMI 2.1 for high refresh rates on the PlayStation 5 and Xbox Series X. You can also hook up the display over USB-C with the same specs as the DisplayPort, though most graphics cards don’t have a USB-C output these days.

I have to say that iCue is my favorite peripheral app, and it’s a big reason I rate peripherals like the Corsair Sabre Pro so highly. The Xeneon 32 will show up in iCue just like peripherals would, and you can adjust everything you’d normally see in the on-screen display (OSD). That includes all of your picture settings, but also settings like the audio source and if you want the LED power indicator on.

The app also enables two other ways to control the monitor — through Elgato’s Stream Deck or the Corsair iCue Nexus. Both come with a more limited range of settings, like your input source, picture mode, and gamma, but they’re nice to have. You need one of these pieces of hardware to unlock this functionality, and the Xeneon doesn’t make an argument to buy one. If you already have a Stream Deck or Nexus, though, it’s a nice perk.

You have a good amount of bandwidth in the settings, and Corsair doesn’t bog down the experience with a messy on-screen display like the MSI Optix MPG 32. Corsair provides several picture modes, including sRGB, AdobeRGB, and DCI-P3 modes for creative workers, and you can access settings like the local dimming toggle even with HDR turned on.

There’s one reason the Xeneon 32 looks so great: quantum dot technology. This extra layer boosts colors way beyond what typical IPS panels are capable of, and it allows the Xeneon to achieve excellent color coverage and accuracy. HDR isn’t great, as I’ll dig into in the next section, but quantum dot meant I was fine leaving HDR turned off.

Let’s get the results out of the way: You’re getting 100% coverage of the sRGB and Adobe RGB color spaces, and the Xeneon 32 has dedicated presets for each of these modes to limit the color coverage. You also get 95% coverage of DCI-P3 according to my results, and the monitor is shockingly color accurate out of the box — I measured a Delta E of 0.81, which is suitable for professional color work.

Where the Xeneon 32 struggles is black levels. I measured a peak brightness of nearly 480 nits, well above the rating Corsair advertises. The washed-out blacks meant that the contrast was much lower, though, hitting 660:1 as opposed to the 1,000:1 that IPS panels can manage. It’s not a problem with HDR turned off, but with it on, the contrast stings.

Local dimming is available, both with HDR on and off, but the slow transitions and limited number of dimming zones make it not an option for most people.

I didn’t care about contrast when using the Xeneon 32, though. I was all focused on color. Quantum dot does wonders for color saturation, making games, movies, and even the Windows desktop looks much more vibrant. The Xeneon 32 in SDR looks like you cranked up the saturation dial just before it became too much, and I love the results.

The problem is the competition the Xeneon 32 faces. At $1,000, it’s competing against Sony’s InZone M9, which has much better HDR, and Alienware’s 34 QD-OLED, which further enhances quantum dot over a contrasty OLED panel. Corsair’s monitor can go toe-to-toe with most 4K monitors in its price bracket, but it doesn’t stand up to the cream of the crop and doesn’t offer anything new in the panel department.

HDR on PC is terrible, and a lot of that comes down to monitors. Displays like the Sony InZone M9 are pushing the envelope with Full Array Local Dimming (FALD) and a larger number of local dimming zones, but the Xeneon 32 isn’t joining Sony’s ranks.

The display carries VESA’s DisplayHDR 600 certification, which is just a step above the lowest DisplayHDR 400 certification you find on monitors like the HP Omen 27c. The certification is important, but it’s more important how the monitor gets there. Corsair uses edge-lit local dimming over 16 zones, which means the monitor can adjust how bright the backlight is over certain sections of the screen to increase contrast.

It just doesn’t hit the mark. Even achieving upwards of 700 nits of brightness with HDR blaring, the blacks continued to look washed-out in gray due to the IPS panel. This is a limitation of the panel technology Corsair is using, and without proper FALD like the InZone M9 offers, you won’t get solid HDR performance.

The Xeneon 32 hits all the marks for gaming performance. The 144Hz refresh rate is perfect for most gamers, it works with FreeSync and G-Sync for variable refresh rate, and a dedicated gaming mode can make response times as fast as possible. With standard dynamic range, the Xeneon is a great gaming monitor.

I played Destiny 2, a bit of Resident Evil 2, and Monster Hunter Rise. All three looked great, but I was constantly reminded of the 4K resolution with an RTX 3070. Remember, 4K is still demanding in 2022, so make sure you have one of the best graphics cards in your PC if you want to pick up Corsair’s latest display.

The limited dimming zones and washed-out black levels just didn’t do it for HDR gaming.

Response times and variable refresh rate were solid, but I rarely switched to HDR to play games. The limited dimming zones and washed-out black levels just didn’t do it, even in Destiny 2. Worse, the quantum dot layer isn’t at its best in games with HDR turned on. Turning off HDR and switching to the Game preset results in much more vibrant colors and a boost in contrast.

I loved gaming on the Xeneon with HDR turned off. Quantum dot does so much for the color that you’ll forget HDR is even an option, frankly. Good HDR would boost that experience further, though. I would’ve liked to see more dimming zones, or maybe even better contrast with a VA panel, especially given the price Corsair is asking.

The Xeneon 32 isn’t too expensive, but it comes in at $100 more than its most direct competitor — the MSI Optix MPG 32. I suspect both the MSI and Corsair monitors are using the same panel, as they both offer a 32-inch 4K screen with a 144Hz refresh rate, and they both use quantum dot to enhance the colors. At $1,000, the Xeneon isn’t too expensive, but it’s on the edge.

I’ll have to see what the monitor actually sells for when it hits the market. At some points, the competing MSI monitor sold for around $1,400. Right now, $100 separates the two monitors. Depending on sales and demand, though, I imagine they’ll end up selling around the same price, give or take $50.

While iCue integration is a reason to spend the extra money, if you’re only concerned about specs, you can save big. The Gigabyte M32U, for example, is also a 32-inch 4K display with a 144Hz refresh rate, and it often sells for $750 or less. It doesn’t have as good of HDR performance, but frankly, the Xeneon isn’t jaw-dropping in the HDR department either.

The Xeneon 32 stands out with quality of life features like iCue and excellent color due to the quantum dot layer. As displays like Sony’s InZone M9 and Alienware’s 34 QD-OLED become available though, the price is a bit high for what Corsair is offering. Gamers will love the boosted color, but if you’re after HDR, there are better options for around the same price.

Are there any alternatives?

Yes. The most direct competitor is the MSI MPG 32 QD, which also has a 32-inch screen with a quantum dot layer. If you don’t mind changing sizes, Sony’s InZone M9 and Alienware’s 34 QD-OLED are great alternatives that offer better overall image quality and far better HDR performance.

How long will it last?

IPS panels will last for years at full brightness, so you can expect a decade or more of use out of the Xeneon 32 before you need to upgrade.

Should you buy it?

Yes, assuming the price will come down. Right now, MSI’s offering is cheaper while matching the Xeneon 32 point-for-point. If they end up selling for around the same price, Corsair’s monitor is still a better option due to its iCue integration.