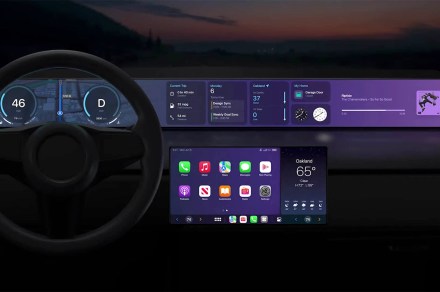 Apple is developing a new CarPlay feature that will let drivers pay for gas via their vehicle’s dashboard.

The feature was quietly unveiled at Apple’s Worldwide Developers Conference in early June but went unreported until now.

According to Reuters, Apple is aiming to bring it to its in-vehicle CarPlay software platform as early as this fall. It means that hundreds of CarPlay-compatible vehicle models should get the new feature when iOS 16 drops, probably in September.

Once operational, drivers using CarPlay will be able to select an app for navigation to a gas pump, and then purchase the fuel by making some simple selections on the in-car display. The only thing it won’t do is stick the nozzle in the car and fill it for you.

iPhone owners keen to use the new feature will be required to download a fuel company’s app to their handset before entering a payment card’s details. After that, they’re good to go.

Gas station operator Sinclair, which has around 1,600 gas stations across the country, is keen to get on board, according to Reuters. Indeed, it’s already planning to update its Dinopay app to support Apple’s new feature, offering customers an easy way to purchase fuel at its sites.

As the news outlet points out, Apple has already enabled CarPlay to support apps for activities such as parking, charging electric vehicles, and ordering food, and so paying for fuel in this way is just the latest way for the company to expand the platform’s usefulness.

Apple launched CarPlay in 2014 to give iPhone-owning drivers a safe and easy way of accessing the handset’s apps and features via Siri, touch, or using physical controls. The tech giant describes CarPlay as offering “a smarter ride from start to finish” and “the ultimate co-pilot.” Android users can access a similar platform called Android Auto.

Digital Trends has reached out to Apple for more information on the upcoming feature and we will update this article when we hear back.