Volvo has reinvented its image over the past decade, taking its cars from stodgy to stylish, and keeping pace with tech developments. Now, it’s trying to do that once again.

The 2024 Volvo EX90 is the Swedish automaker’s new flagship — and it’s electric. This three-row, seven-seat SUV packs all of Volvo’s latest infotainment and safety tech, so its electric powertrain is an important statement of Volvo’s commitment to going all-electric in the future.

The EX90 isn’t a standalone EV. Its styling and tech will set the tone for future Volvos. The business case isn’t EV-specific either. The EX90 has the same form factor as Volvo’s popular XC90 SUV, which it one-ups in tech. Volvo isn’t trying to prove that it can make an EV; it’s already done that with the XC40 Recharge and C40 Recharge. It’s just trying to make a good car.

“There are no gimmicks in the EX90.” Volvo Cars CEO Jim Rowan said in a keynote at the EV’s reveal in Stockholm. “All the technology that’s there is there for a reason.” And boy, is there a lot of it. 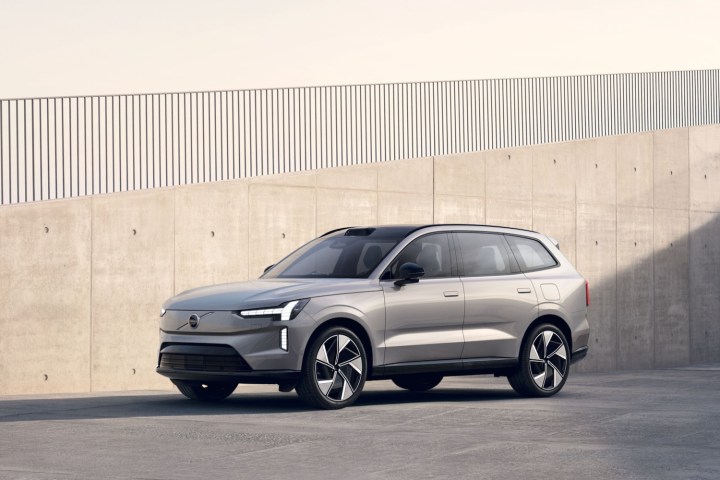 The EX90 is a conventional SUV design with the sharp edges shaved away. There isn’t even a hint of a grille, the door handles sit flush with the bodywork, and the wheels have smooth inserts between the spokes. It’s all to help minimize aerodynamic drag — an important consideration for an EV, as it helps increase range.

The result is a coefficient of drag (Cd) of 0.29, compared to 0.33 for the current Volvo XC90 three-row SUV (lower numbers are better). The EX90 isn’t the slipperiest electric SUV around; the Mercedes-Benz EQS SUV has a 0.26 Cd. But Volvo’s designers retained a more traditional SUV shape, in line with the gasoline Volvo XC90, without resorting to the Jell-O mold shape of the Mercedes.

“The profile and a bit of the plan view is a bit rounder than maybe we’ve done in the past,” Volvo exterior design boss T. Jon Mayer told Digital Trends. “It’s not a jellybean blob by any means, but there are very minute details of how much roundness you put around the edges. This detail work, as well as a longer rear overhang, help keep air flowing smoothly around the car while following the minimalist ethos of Scandinavian design, keeping the bodywork visually clean.

The EX90 is a conventional SUV design with the sharp edges shaved away.

The interior has the same minimalist look as current Volvos, but with a greater emphasis on sustainable materials. Trim pieces are made from Nordico, a mix of recycled PET plastic bottles and biomaterial sourced from Swedish and Finnish forests. 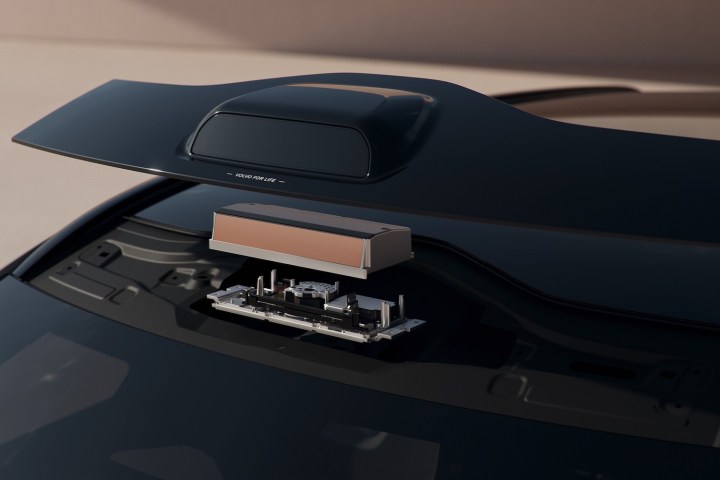 Sensors enable today’s driver-assist systems, and automakers promise that they’ll lay the foundation for tomorrow’s self-driving cars. The EX90 takes a step toward that future as the first Volvo with integrated lidar. This sensor technology, which works on the same principle as radar, but uses light instead radio waves, is already used by most developers of self-driving cars. Volvo believes lidar will enable “unsupervised autonomous driving” capability to be added through an over-the-air (OTA) update at some future date.

But engineers and designers had to figure out where to put a lidar unit on a vehicle already crammed with five radar sensors, eight cameras, and 16 ultrasonic sensors.

The EX90 is the first Volvo with integrated lidar.

“I remember getting this and thinking, ‘oh my, where are we going to hide this,’” Mayer said about the Luminar Iris lidar unit. Designers originally considered placing it in the grille, where other sensors are located, but engineers asked for it to be mounted as high up as possible to maximize the field of view. A mounting location behind the windshield was also ruled out because it would have blocked the dispersal of light particles at certain angles. So the lidar sits in an aerodynamic fairing on the roof, putting the technology on display and, Volvo claims, allowing the sensor to see up to 820 feet ahead.

For now, the lidar and other sensors will help improve performance in Volvo’s existing array of driver-assist features, such as the Pilot Assist highway driving system. At least until that promised autonomous driving upgrade arrives, that is. 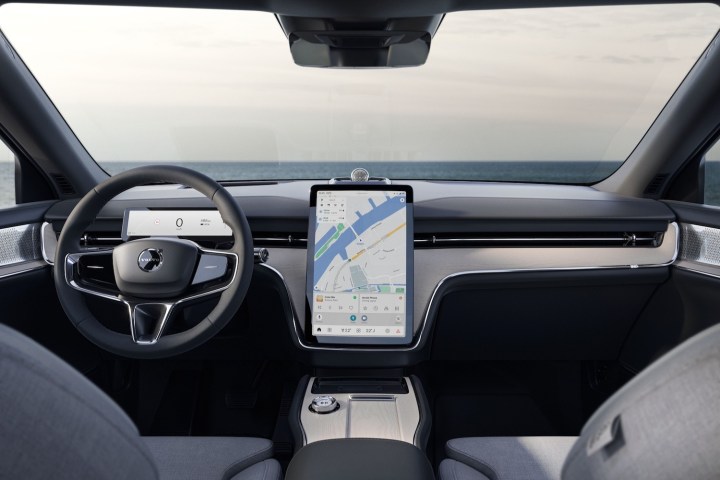 The sensors don’t just look outside the vehicle. The EX90’s standard “driver understanding system” tracks the driver’s gaze to detect distraction, drowsiness, or intoxication. Other automakers have their own driver-monitoring systems, but they generally just track where the driver is looking. Volvo claims its system monitors patterns to better gauge a driver’s state of mind. It also uses two cameras (at different angles) instead of the single camera of most other systems, and is tied into the car’s driver aids, allowing the car to respond on its own.

Like driver monitoring, Volvo took occupant sensing to a new level. Many automakers offer rear-seat reminders to prevent drivers from leaving children or pets unattended, but Volvo added in-car radar units that can detect a sleeping infant’s breathing. They cover the entire passenger compartment and the trunk, and are connected to the climate control, which can be automatically turned on to reduce the risk of hypothermia or heatstroke, Volvo claims. 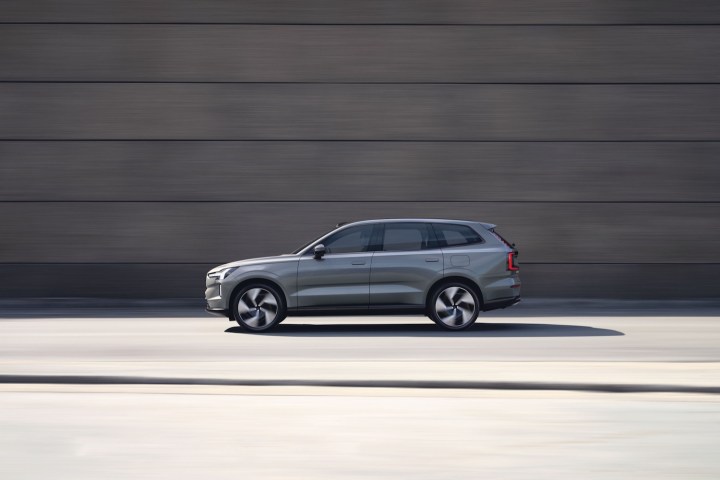 A 14.5-inch touchscreen and 9.0-inch instrument cluster feature graphics generated by Epic Games’ Unreal Engine. The EX90 runs an updated version of the Google Built-in infotainment system previously seen in other Volvos. It has the capabilities of Android Auto, such as Google Maps and Google Assistant voice control, plus a few extras, like the ability to sync with home Google devices and access the Google Play app store. Apple CarPlay is supported as well, along with 5G connectivity and a digital key feature that lets drivers use a smartphone in place of a standalone key fob.

On the digital instrument cluster, Volvo used a familiar layout, but tried to decrease distraction and confusion. For example, the thin instrument cluster only displays relevant information; you won’t get an icon for your headlights or wipers unless you actually turn them on or off. And if you’re using navigation and move to a different menu on the main touchscreen, an icon stays at the top of the screen so you can get back to the map easily.

For the main touchscreen, Volvo’s designers also selected a large map up top and a fixed bar for functions like climate control at the bottom. That’s a layout we’ve seen before, but it’s also the best one for clearly conveying information, Volvo claims. The map is placed up high because testing has shown that it’s better for visual processing, while climate controls occupy the bottom of the screen because that’s ergonomically advantageous, Anna Arasa, UX design manager for the EX90, told Digital Trends, noting that the touchpoints land where hands tend to rest. 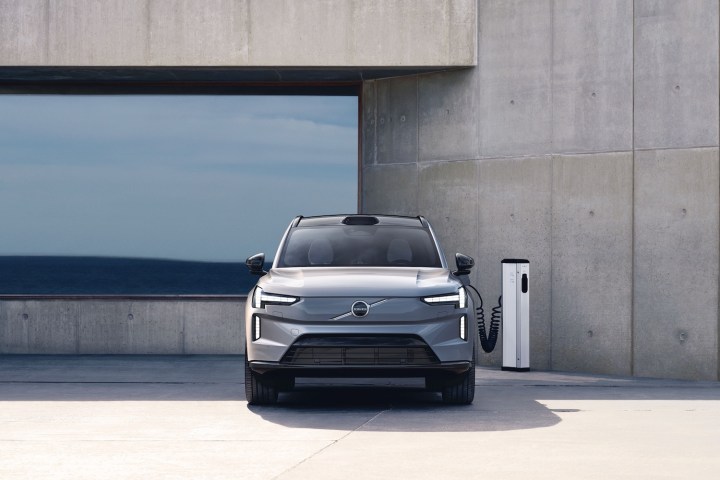 Kilowatts wherever you need them

A dual-motor all-wheel drive system provides 408 horsepower and 568 pound-feet of torque in its standard configuration, and 503 hp and 671 lb.-ft. of torque for the performance version. Volvo quotes zero to 60 mph times of 5.7 seconds and 4.7 seconds for the standard and performance versions, respectively. As with all Volvos, the EX90 is electronically limited to 112 mph — another of the automaker’s safety policies.

A 111-kilowatt-hour battery pack provides an estimated 300 miles of range. DC fast charging at 250 kilowatts allows for a 10% to 80% charge in 30 minutes, and the EX90 will support Plug and Charge, meaning you can plug into a public charger and automatically start charging without manually entering a payment method (this feature may not be available at launch, though). Volvo expects its customers to charge at home most of the time, but hasn’t said how long it will take to replenish electrons with an AC home charger.

The EX90 will also be the first Volvo (but not the first EV) with bidirectional charging, allowing it to discharge power from its battery pack to run electronic devices or even charge other EVs. When plugged into a Volvo-supplied home charger and home energy management system, it can also help power your house, or send power back to the grid — reducing stress on electricity-generating infrastructure. That will require some coordination with utilities, however. 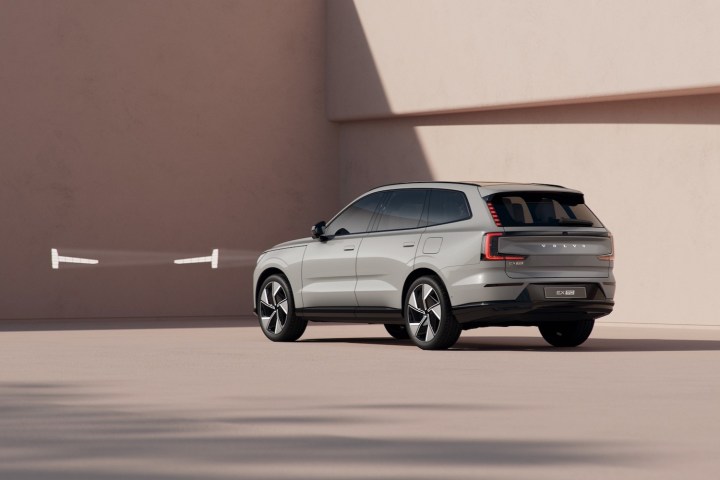 Serious about the EV future

Volvo says a well-equipped EX90 will be available for under $80,000, putting the seven-seat EV in the same ballpark as the current seven-seat XC90 Recharge plug-in hybrid. Deliveries aren’t expected to begin until early 2024. Customers can pre-order now for priority in the delivery queue, but won’t be asked to configure their builds until fall 2023, around the time production is expected to start at Volvo’s Ridgeville, South Carolina, factory.

The Volvo XC90 will continue to be sold with mild-hybrid and plug-in hybrid powertrains. With charging infrastructure still an unsolved problem, the XC90 will likely remain a more practical choice for many buyers. But the momentum has clearly shifted to the all-electric EX90.

Instead of another gasoline SUV, Volvo chose to roll out its latest tech — from lidar to passenger-monitoring radar — in an EV. Yet the EX90 still looks and feels like a Volvo, evolving the style the XC90 introduced. The EX90’s tech and design elements will trickle down to other Volvo EVs, starting with an SUV smaller than the current XC40 launching in 2023 and continuing until 2030, when Volvo plans to have an all-electric lineup, per Volvo Car USA CEO Andres Gustafsson. Most automakers now claim to be interested in EVs, but looking at the EX90, it seems Volvo really believes they are the future.